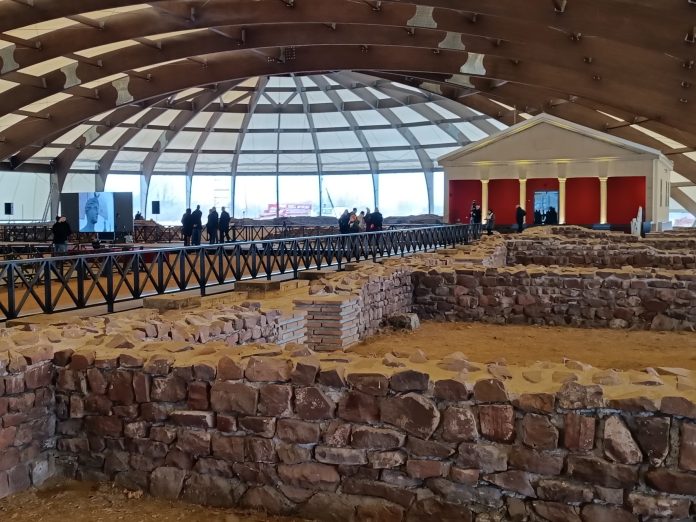 Mediana is one of the most important Serbian Late Antiquity archeological sites, built between III and the beginning of IV century. It was constructed during the reign of emperor Constantine the Great and his heirs. Today, Mediana is an archeological park where one can see remains of the villa with the peristyle with more than 1.000m2 of the valuable flour mosaics.

Mediana was built built between III and the beginning of IV century on the left bank of the Nišava River, beside one of the most important roads, Via militaris. It was located between urban Naissus and thermal springs of Niska Banja and extended over the area of 40 hectares.
During the 4th century, overpopulated Naissus, surrounded by walls and towers, ceased to be an attractive place for life for its wealthy citizens, so they spent most of their time in their estates in Mediana. They built there new or restored old villas which served for rest and pleasure. Over time, the villas changed their purpose, and from the places for temporary stay, they became places of luxury life outside the city.

Villa with a peristyle

The central place in Mediana is taken by a villa with a peristyle, the most sumptuous building of residential character. The villa was probably built by order of Emperor Constantine The Great so that he, members of his family and numerous high imperial officials would have a place to stay during their visits to Naissus. The entire complex was enclosed with high walls and was spread over the area of 4.7 hectares, and a seventh of the entire area was tiled with mosaic. Most mosaics had decorative, geometric motifs, and most of them can be still seen in Mediana today. Two mosaics that are best preserved and that draw special attention are mosaics with figural mythological representations of the river god Flavius and the head of Medusa.
A lifestyle in the villa is vividly evoked by the remains of the buildings found in Mediana: audience hall, which is a room designed for carrying out state affair; porches and richly decorated gardens with fountains and pavilions which were designed for social gatherings and leisure, two small dining rooms, which are assumed to have served for more private audiences and feasts of the emperors; thermae, a Roman bath, is a part of the villa that was used by residents of Mediana for body care and relaxation. Hot and healing water was used in thermae, which was brought via lead pipes from Niška Banja.