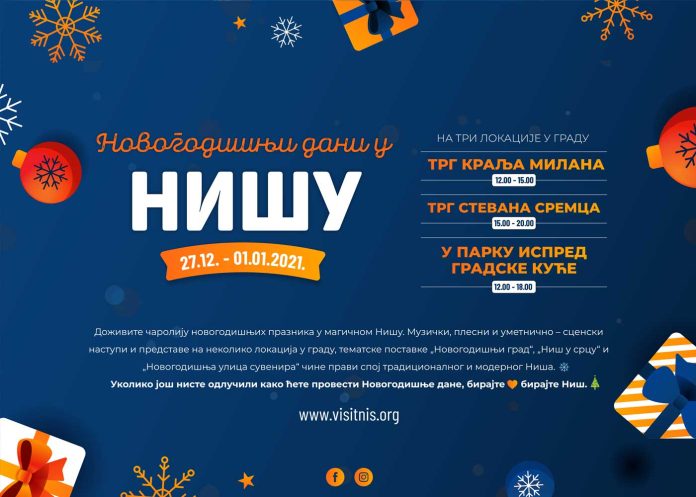 This year “New Year’s Days in Nis” will be held from 12/27/2021 to 01/02/2022. at three locations: King Milan Square, Stevan Sremac Square and the park in front of the City Hall . The program will include –  music and dance program, as well as artistic performances and theathre plays for children and youth.

The program on King Milan Square will be performed in the period from 12:00 to 15:00, and on Stevan Sremac Square from 15:00 to 18:00. The program will performe artists from –  the Puppet Theater-Nis, Faculty of Arts Nis, Music School Nis, Children’s Cultural Center, National Library Nis, Student Cultural Center, children’s choir “Magic Note”, as well as dance studios “Theater Dance”, “Contra”, “Phoenix”. “Boom 018”, “Ilusion”, “Extreme dance studio” and others.

At the same time  “Ethno Bazaar” will be held on King Milan Square, where you will be able to buy traditional handicrafts from the South Serbia.

The plateau in front of the City Hall from December 28 to January 2, becomes a Magical Santa’s city where you can see:

–    New Year’s log cabin of Santa’s helpers – this is a log cabin where children will have the opportunity to play with ponies.

–   Santa’s magic log cabin – a place where you can take magical photos with Santa Claus and reindeer, covered with sparkling snow.

–   New Year’s fun log cabin – fun games for children will be prepared in the yard of this log cabin. The animators will be in the costumes and will lead the program and games with the participants.

–    New Year’s love log cabin – “New Year’s romantic log cabin” where you will be able to send a message of love and take the most beautiful romantic photos.

For four years in a row, on Stevan Sremec Square – an artistic, New Year’s program called “Niš u srcu” is taking place. Decorated wooden houses are becoming exhibition and sales points of Nis artists, but also places where you can try mulled wine, cakes and other Nis gourmet delicacies. In addition to the participants from Nis, this year we will have performance of the students from the first contemporary music school from Belgrade “Master Blaster”.