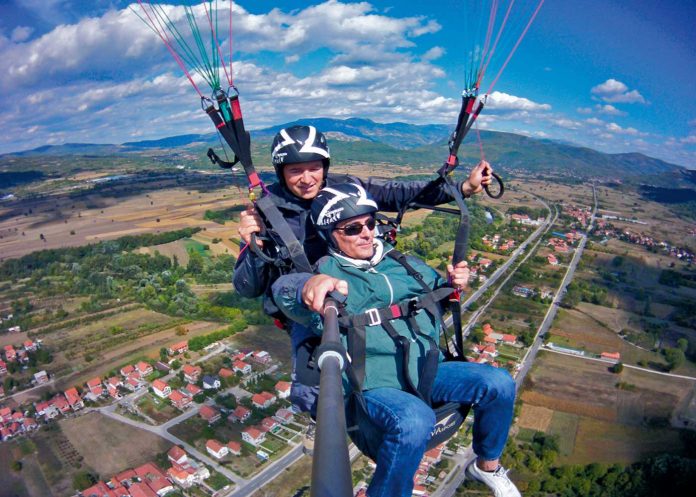 ’’If you want to find out why the birds sing- try paragliding’’.

Paragliding tandem flight gives you a unique sense of freedom, raises adrenaline and provides an extraordinary view on natural beauties from ’’the bird’s-eye view’’.

TERRAINS:
• For the beginners we recommend the take off on Koritnik, 4 km from Niska Banja downtown, 15 km from Nis. By a passenger vehicle it’s possible to reach the start at 550 m, while the landing is on the height of 220 m.
• The dare devils can try the take off Visegrad, 20 km from Nis towards East, over Sicevo village. The road leads to the peak Visegrad- the starting point is on 1.020 m, landing point on 320 m. At this take off the competitions have been organized since 1995.

INTERESTING FACTS:
• The valley of Nis surrounded by mountain ranges represents an ideal terrain for paragliding. Favourable winds and good climate conditions of the Nis surroundings are fit for organizing European and world competition (National Championship in Paragliding 1997; The Third World Championship 2005; World Cup in Flight in Sicevo, two First category competitions in Landing and Flight in 2008, Paragliding World Cup 2017. )
• The best period for flying is from May till September, although it’s possible to fly throughout the whole year.
• On the terrain of Visegrad, Miroljub Janicijevic, a member of paragliding club ’’Grunf’’ from Nis, achived a height record of 3.600 m.